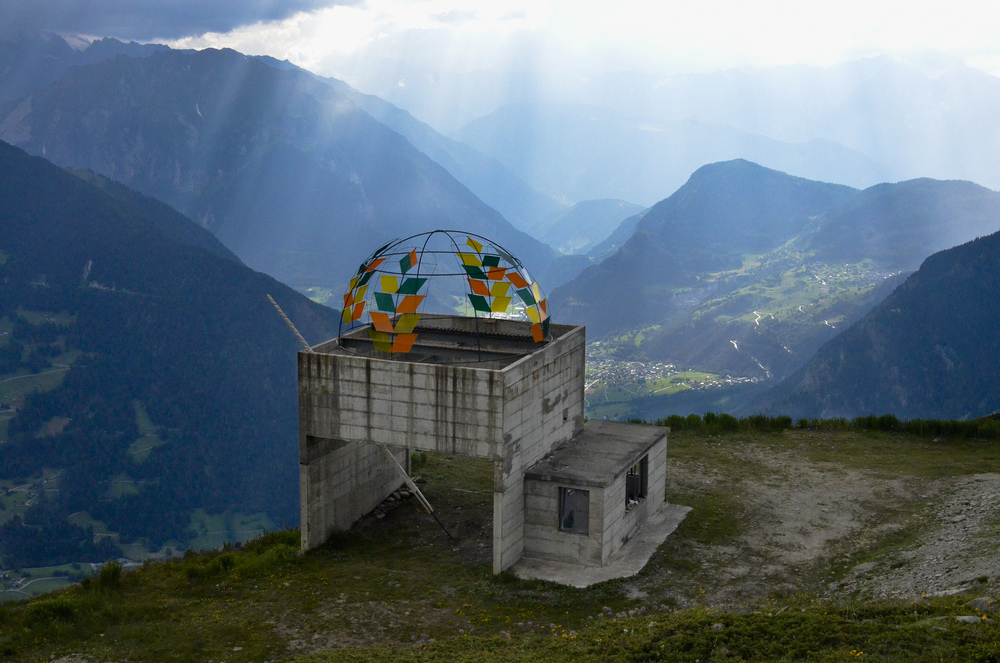 Titled “The Forever Museum Archive: Dome and Double Nymph_An Architectural Template for Spiritual Worship”, this group of sculptures was the result of ongoing research manifested in both literary and three-dimensional interpretations that stem from “The Forever Museum” essay.

“Dome and Double Nymph” employs a set of systems, both architectural and performance based. Each component comments on aspects of historiography pertaining to religion, nature and architecture. The artist sought to create a template of a sanctuary/meditative space that is both shamanistic and monotheistic. In this work, I seek to analyze the disjunctures between “pagan” religious beliefs and mainstream, pious architecture through six parts.

The first component is the carving of a siamese Alpine tree, 42'h x 2'w. The two trees are naturally joined at four vagina-like crevices within the hips, hence the name "Double Nymph". It serves as a maternity figure within the sanctuary. Due to its spear-like shape, it also doubles as a war object.

The dome in which the large carving resides is the second component of the group. It serves as a template of a historical dome rather than a utilitarian dome. I arrived at the size and shape by using the scale of my body--the size of the individual glass of the dome is sized to the measurement of my torso, and the frames holding the glass measure my arms spread apart from finger tip to tip. It is a reference to Leonardo Da Vinci's Vitruvian Man. Composed of steel and glass, the dome is 14ft in diameter--1.5 times my body length.

The third and last part is a “Viewing Room”, 42' x 10' x 8’, contains a vitrine recessed beneath the surface of the floor. The vitrine, 10''d x 26’’w, encases various artifacts, mainly the skin of the carved tree for both protection and display. Other artifacts include a multicolored chunk of mosaic tiles; a pair of carved cow horns, which belonged to an ancient herens breed native to the Swiss Alps since 2nd century BC; and a chunk of carrera marble flooring.