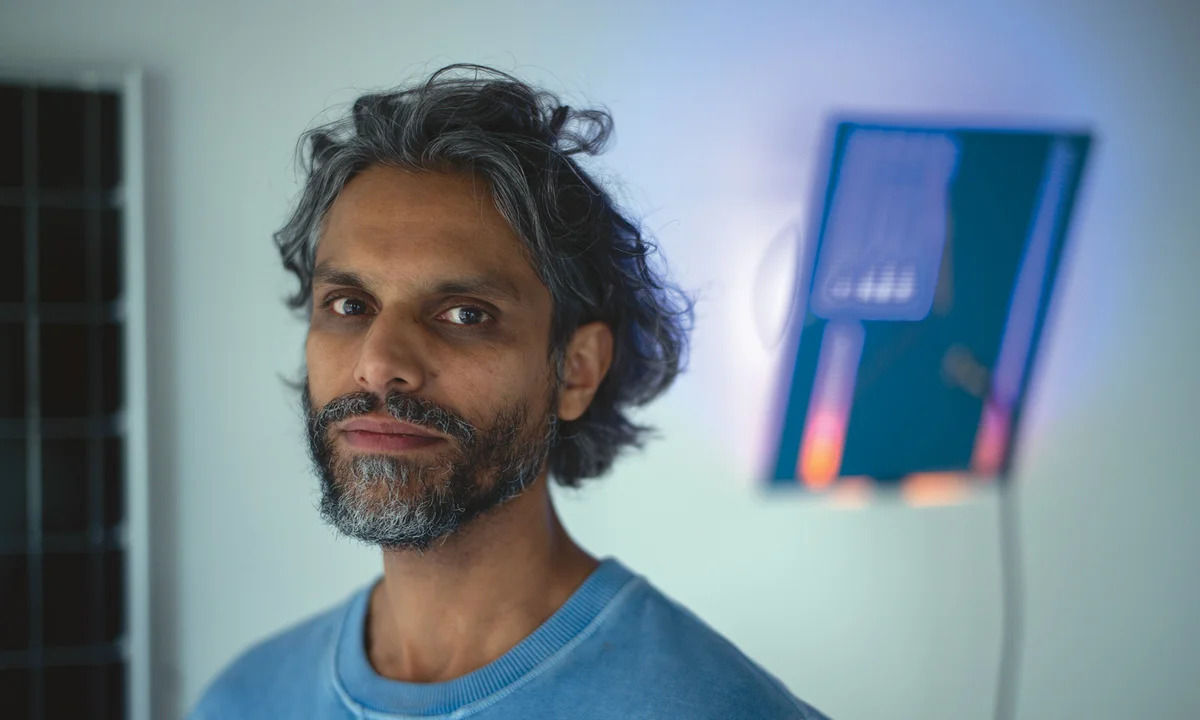 The Verbier 3-D Foundation is pleased to announce British artist Haroon Mirza as our 2023 Artist-in-Residence.

Mirza has won international acclaim for creating immersive environments, performances and kinetic sculptural installations that explore the interaction between technology, sound, light, and electric signals. Through the use of electricity as his main medium, the artist questions our consciousness, behavioural patterns and ways of understanding the world around us.

He won the Silver Lion for most promising young artist at the 2011 Venice Biennale with The National Apavilionof Then and Now, a triangular anechoic chamber (a space with no echo) lined with sound-absorbing foam and fitted with LEDs that generated a noise which intensified as their light brightened. It is now in the collection of the Museum of Modern Art, New York.In a residency at CERN in 2018, Mirza co-produced a film and an opera incorporating music, poetry, incantation, archive and homemade electronic instruments, some built from discarded CERN laboratory equipment; in the same year his solar-powered Stone Circle, made up of nine marble boulders fitted with speakers and LEDs, was permanently installed in Marfa, Texas.

While residing within a dynamic community in the Swiss Alps, the artist will focus on undertaking creative work, conducting local research and engaging in an interdisciplinary dialogue around current climate concerns in relation to the themes of WATER and ENERGY. The aim of the residency is the development of a new project inspired by the materials, technologies and/or ecological knowledge sourced from the surrounding landscape of Verbier, Switzerland.

Haroon Mirza was born in 1977 in London where he lives and works. He has a BA in Painting from Winchester School of Art, an MA in Design Critical Practice and Theory from Goldsmiths College (2006) and an MA in Fine Art from Chelsea College of Art and Design (2007).